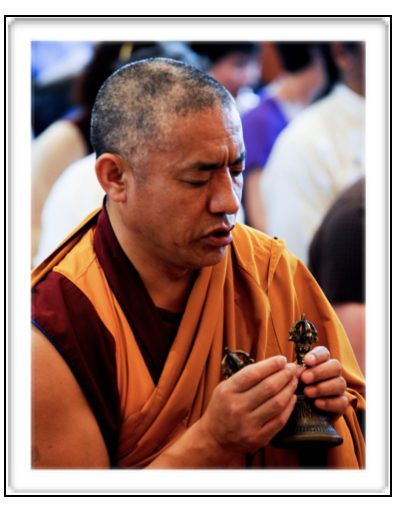 Geshe Jampa Gyaltsen was born in 1964 and thereafter raised in the Tibetan village of Rumbatsa, within the broader district of Trěhor Kham, original site of the now legendary Dhargyay Monastery, and birthplace of our centre’s kind founder Khensur Kangyurwa Rinpoche Lobsang Thubten, along with several other great Tibetan scholar-yogis of the 20th century.

Geshela’s father passed away when Geshela was still young, but theretofore had apparently been an important local official. He was raised thereafter by his mother.  Like most households in this particularly pious area of Tibet, Geshela’s family were enthusiastic Dharma practitioners. Despite such widespread fervor, however, the Chinese forces had destroyed almost all of the local monasteries. Secular education was, too, at the time a seemingly rare commodity in the area, and as such Geshela had to wait until he reached the age of twelve to begin formal education in earnest.

The Chinese occupiers having relaxed their emphasis on restricting Tibetan border crossings by the beginning of the 1980’s. In 1984 the time was right for him to escape  the oppressive regime that had been instilled in Tibet and make the long and arduous journey to South India and the monastic seat of Sera in order to begin his formal philosophical studies.

From such relatively humble beginnings, Geshela all at once found himself at the holy feet of the then Abbot of Sera Jey, our very own Khensur Kangyurwa Rinpoche, who bestowed on him the rab chung precepts of one gone forth (from life as a householder), thereby enabling Geshela to don newly the robes of a monk and begin his studies at Sera. Having been requested, Rinpoche took the new arrival under his care, most compassionately agreeing to act as both his Kasha Gen and Petri Gen. Having shortly thereafter set out in his studies of philosophical program that would eventually take him 18 years to complete, Geshela continued receiving regular (thrice-a-week) petri from Rinpoche until the latter’s departure in 1988. Thereafter, Geshela received the rest of his petri (until his 2002 completion) from Rinpoche’s eldest student and the current Sera Jey Abbot, Khen Rinpoche Lobsang Palden. A long-time and committed disciple now the among the eldest Geshes in Khen Rinpoche and Khensur Rinpoche’s house-group, there is no danger in saying that Geshela’ is among the closest students of both of the former respectively.

Under the guidance of such inconceivable teachers, a young Geshela’ soon proved himself to be an exceptional pupil, his excellent results obtained throughout his studies at Sera thereafter in large part owing (though certainly not entirely) to his uncommon faculties of memory, for which he quickly became well-known. Geshela’ was a regular recipient of the first prize for memorisation among his classmates, memorising all of Haribhadra’s Commentary Clarifying the Meaning (210 pages) and our own Khensur Kangyurwa Rinpoche’s Jewel Rosary Encapsulating [the meaning of] Vinaya (160 pages) to list but a few. In preparation for his studies of the Madhyamaka Middle Way Philosophy) he also successfully memorised in full ‘The Essence of Excellent Explanations of the Definitive and Interpretive’, Je Tsongkhapa’s masterpiece on the subtle and profound view of Buddhism’s Consequence Middle Way School. Considered to be perhaps among the most difficult texts to hold in memory, it is commonly said in Tibetan circles that for those rare few that can recite it 100 times from memory, realising emptiness in this very life is all but assured.

On the back of such hard work away from the debate courtyard, Geshela’ quickly developed a reputation as an outstanding debater. Geshe Jamyang Tenzin, an old friend of Geshela’, recalls that beyond being merely uncommonly intelligent and well-read, Geshela’ was exceptional in his enthusiasm for debate, tirelessly debating difficult points back-and-forth with classmates in a large group setting without falter or fear of embarrassment. During his studies of Parchin (Perfection of Wisdom), Geshe Jampa Gyaltsen offered the prestigious Rigchung debate exam in front of all of Sera Jey’s 2000+ monks, and was later awarded first prize for that year.

His reputation as a young scholar in the making all but established, in around 1991 Geshela’ first received requests from junior monks to give lab lab classes on the debate material being studied.  Despite his own schedule being – like every other keen young student at Sera – extremely hectic, it is testament to Geshela’s wish to benefit others that he immediately began taking on such classes, and has now been tutoring young monks around the major doubts of the five great texts for around 20 years.

Having entered the Lharampa class – akin to a 6-year long set of ‘post-graduate’ studies – in around 1995 (not long after beginning such a role as lab-lab tutor), Geshela’ continued to excel in the latter part of his Geshe degree studies in spite of the competing demands of his own studies and the needs of his students. After the trial of some 6 years of Gelug Examinations, Geshela’ finally obtained his Geshe degree in late 2001, sitting his final damcha shortly after Tibetan New Year in 2002. Geshe la’s 18 years of endeavour at Sera ultimately culminated in his attainment of a Lharampa Geshe Degree of the First Division (highest among the three classes awarded to Lharampa Geshes of the Three Monastic Seats), and the prestigious honour of scoring highest among all of Sera Jey’s Lharampa Geshes of that year.

After receiving his Geshe degree, Geshela’ immediately thereafter spent an intensive year at Gyumẻ Tantric College honing his knowledge of Buddhist tantric practice, theory and ritual. The standard one-year course offered only to Geshes from the Three Monastic Seats incorporates teachings on the four classes and two stages of tantra from experienced teachers, formal daily debate around the difficult points with one’s fellow classmates, and extensive meditation and sadhana recitation sessions where the one attempts to apply in practice the various modes of ritual and meditation one studies and debates.

Having returned from Gyumé Monastery, Geshela’s former academic excellence soon opened the doors to the prestigious roles of 2005 Tehor Khamtsen Gen – whose primary responsibility of ensuring the discipline of and generally promoting the cause of application to one’s studies to the younger monks within one Khamtsen – and 2006-9 Lopnyan Gen – a hands-on supervision and coordination role pivotal to the Sera debate process role and open only outstanding scholars who have completed their Geshe studies in full. Despite the additional demands of such roles, throughout the time Geshela’ has at Sera since taking his Geshe degree (now some 8 years in total), Geshela’ has been giving petri classes (see note 5) to steadily growing groups of students. At the time his leaving for TBI and Adelaide, Geshela’ represents one of the most important petri gens at Sera Jey, and leaves behind some 14 classes of devoted students, to whom he has until now offered up to 7 hours a day.

At the time of writing, Geshela’ is in a car on the way to Bangalore airport ready for his flight out to Australia, and now stands ready to fulfill the request his teacher first made in 2002 – for him to come and teach at his Dharma centre in Australia. Asked about what he expects for the experience, Geshe laughs that he has until now not yet had the opportunity to travel outside of India and Tibet, and indeed has not been in aeroplane until this very trip. In spite of this, Geshela’ is very comfortable around Westerners and certainly seems to intuitively understand the Western Buddhist practitioner and their way of thinking far better than one might assume.

What of Australia and TBI did Khensur Rinpoche describe to Geshela: Rinpoche said that Adelaide is a city with ‘generally mild weather, and that his Dharma centre is in a quiet and peaceful spot, with some 60 to 70 frequent students there with a very keen interest in the Dharma’. Asked what are his hopes for his time in Australia, Geshela’ smiles warmly, replying that he has ‘a great hope and wish to learn fluent English [which Rinpoche has personally instructed him to put effort into]’, and, more broadly, to bring the teachings closer to his heart. ‘We [Geshes] have studied [Buddhist] texts for 20 years now. [But] there’s no [value in] putting the teachings over to one side [outside of oneself, without integrating them]’. The meaning of the teachings has to be grasped for oneself.

Reflecting on this process, Geshela’ emphasizes greatly the value of the texts on Tsäma (Logic), Lo Rig (Mind & Cognition), and so forth as a means for moving beyond a sort of ‘blind faith’ in the teachings. ‘As H.H. The Dalai Lama often says [in teachings], the best conviction is that found on the basis of a valid reason’. Having said that, Geshela’ concludes that for the moment it is perhaps equally important to reflect deeply ‘compassion, Bodhicitta and the six perfections’, in that these are ‘only beneficial’.

On the eve of his departure from his home of the past 27 years, some people close to Geshela’ have been kind enough as to offer their thoughts on Geshela’s most valuable attributes. Sera Jey’s Abbot, Khen Rinpoche Lobsang Palden has been Geshela’s teacher for over 25 years, and unhesitatingly describes Geshela’s best qualities as his sharp intelligence, his wish to benefit others, his stability as a person, and the fact that whatever work his undertakes, he completes unmistakenly. Echoing to some degree Khensur Rinpoche’s recent comments (at TBI’s 2011 Foundation Day), Khen Rinpoche chuckles as he says that although Geshela’ is not one prone to laughing a great deal, he rarely if ever gets angry, and in general is ‘a very stable person’, who ‘listens to [Khensur] Rinpoche’s advice well’.

Geshe Purbu Tsewang, probably Geshela’s eldest student (of almost 20 years) replies unhesitatingly that Geshela’s humble attitude, discipline, and enthusiasm for whatever activities he undertakes stand out among his personal qualities. Finally, Geshe Jamyang Tenzin, Rinpoche’s long-time attendant at Sera, says that undoubtedly Geshela’s best quality is his pure, special wish to benefit others and his ability to do so, no matter how seemingly difficult the undertaking. On the eve of his arrival – at his kind guru’s request – in a place so incredibly foreign, one can merely hope and pray that Geshe Jamyang’s words ring wholly true in the years to come.