Tibetan Buddhist Institute is a warm and welcoming Buddhist centre dedicated to providing refuge to students of all levels, offering classes and meditation for beginners, through to teachings on Buddhist Philosophy of the highest academic standard, that are rarely transmitted to Western students. Whether or not you have meditated before and want to learn how to calm your mind, or are a serious student of Buddhist philosophy, we have classes and activities to meet your needs.

Tibetan Buddhist Institute was established in April 2005 by our dearly beloved Founder and Spiritual Teacher Kyabje Khensur Kangyur Lama Jetsun Losang Thubten Rinpoche (2005 to 2014) to fulfil the wishes of His Holiness the Dalai Lama who has blessed our centre with his presence.

Tibetan Buddhist Institute follows the ancient Gelug tradition of Tibetan Mahayana Buddhism, Geshe Jampa Gyaltsen. This tradition is followed in many of the great monastic universities re-established in southern India after thousands of monks were forced to leave Tibet.

We offer a beautiful and tranquil environment in which to meditate and learn in the Mahāyāna tradition, which seeks to encourage the values of love, kindness, compassion and wisdom, to benefit not just ourselves but all beings. By training our minds through meditation and through study, we can learn how to fulfil our own limitless potential to become happier and more able to cope with the difficulties we all experience.

About our Translator, Ilia Durovic

Some of you may not know much about our translator, Ilia Durovic. Because of Covid, few people come to TBI to listen to teachings, and therefore don’t have the opportunity to meet Ilia in “real life”. I hope the following gives insight into our highly respected and much venerated, translator.

Ilia Durovic, formerly a US citizen, is one of the students of the late Geshe Rabten Rinpoche, who was the Counsellor in Religious Affairs of HH the Dalai Lama. Ilia studied Buddhist philosophy under Geshe Rabten’s direction and was his personal French translator in Switzerland until Geshe Rabten’s passing in 1986. Ilia also translated into French for His Holiness the Dalai Lama in Geneva (Switzerland) in 1985.

He then continued studying for many years, taking responsibility for his family after his father’s death in 1988. He came to India in 2001 to attend major teachings of His Holiness the Dalai Lama and shortly after came down to Sera Je (Karnataka, India) with the strong wish to pursue his studies in Buddhist philosophy. As his Tibetan, both colloquial and classical was very good, he was able to start studying Buddhist philosophy privately under the direction of three different Tibetan teachers. One of these was Geshe Yama Rinchen, a very famous scholar, who became his foremost teacher. He then generated the strong wish to become ordained and received Novice and eventually Bhikshu ordination from His Holiness the Dalai Lama under the name of Tenzin Tenpa.

Because of his very good knowledge of Buddhist Philosophy, the then disciplinarian of Sera Je Monastery (second only to the Abbot of the monastery) and his teacher , Geshe Yama Rinchen, decided that he should be allowed to enter directly into the fourth year of studies at Sera Je. This was an exceptional decision made at the time. Ilia also successfully passed a debate examination in Tibetan in front of the whole monastery, which comprised 3,500 monks! He is to my knowledge the only Westerner to ever have done so. Ilia Durovic then studied three further years at Sera Je Monastery, completing an in depth study of Buddhist Philosophy.

During his studies, he sponsored:

Many of these teachings have been made available to an international audience in DVD format or as transcripts, some of which are being published as books. He has also translated for many of the very greatest Tibetan teachers in exile such as the late Khyabje Song Rinpoche, Gomo Rinpoche, Garchen Rinpoche and Gyatra Rinpoche in the Drigung Kagyu tradition (in Estonia), Choden Rinpoche (in France), the present Abbot of Sera Je Monastery, Khen Lobsang Palden (in India) and so forth. 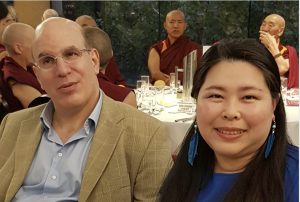 Ilia and his lovely wife, Mandy

The Tibetan Buddhist Institute was established in April 2005 by Kyabje Khensur Kangurwa Lobsang Thubten Rinpoche, in order to fulfil the wishes of His Holiness the 14th Dalai Lama of Tibet.

The aim of the centre is to cultivate Mahayana Teaching and Meditation. It is dedicated to providing the teachings of Lama Tsong Khapa in the Mahayana Buddhist tradition. It seeks to encourage the values of love, compassion, wisdom, non discrimination, self responsibility and fairness, through these teachings, meditation and community service.

The teachings provide a path to achieve such aims, and reminds us to be of benefit to others and ever vigilant in our sense of universal responsibility. This Centre aims to preserve the teachings of H.H. Dalai Lama, our spiritual head, and Kyabje Khensur Kangyur Lama Jetsun  Lobsang Thubten Rinpoche, our founder and spiritual director.

Jamgon Publications is dedicated to the preservation and publication, in bilingual Tibetan-English editions, of the works of one of the pre-eminent representatives of that tradition, Kyabje Khensur Kangyur Lama Jetsun Losang Thubten Rinpoche